May 30, 2018
*This is based on conversations I've had with sex workers, so if I've gotten details wrong I'm open to being corrected

What I haven't read as much on is a tangible breakdown of what the repercussions of these bills looks like in Canada. Why would it affect Canadians, you ask? Because of how far-reaching these bills are, any services that are hosted in the U.S. that are suspected of being used to aid in "sex trafficking" can be (and have been) raided by the FBI. Notice all those "We've updated our Terms of Service" notices? It's because all these companies, no matter if they sell shoes or cupcakes or host cat pictures, etc, all are scrambling to protect themselves.**

Being a sex worker in the city can be effectively like running a business. At the start of your day, you pop online and either put up online ads or check to see if you've gotten responses from ads you've already paid for. One of the first consequences of FOSTA/ SESTA was that websites where a lot of sex workers were able to vet their clients were shut down. Not just American sites, but also Canadian ones, such as Backpage.ca, where SWs were able to connect with clients based on geography. With those sites you've also lost the list of blacklisted clients who are dangerous that sex workers have warned each other to avoid.

Now, not only are you without a safer way to vet your clients, but you're out the money you've put down on ads already because there's no way to get a refund. Some new sites have popped up, but it's a crapshoot trying to figure out the best of lesser options. Some sites have since jacked their prices, none of the sites have the same traffic as the ones that were taken down so advertising doesn't have the same ROI, and because of financial institutions shutting down bank accounts of suspected "sex traffickers" some are only accepting Bitcoin. So now on top of researching what sites are available to be used, you're also trying to study up on Bitcoin and its costs and how to use it.

Let's say that you want to avoid the stress of going online every day to see if your means of advertising has been removed. One option includes trying to find work with a strip club, which requires licensing (a big barrier for many in terms of time and expense), and the competition has increased massively due to the fact that you're not nearly the only one looking at that as an option.

You can also try connecting with an agency, but the competition is still a factor, on top of you now not having control over who your clients are, what you charge, what services you offer, how many clients you book in a shift, or whether you're allowed to enforce protection. On top of all that lack of control, the agency is taking between 30-50% of your earnings, and charging less than what you were when you were able to work on your own. So you're taking on more clients in a day, with less safety and boundaries, for less money. That's before even taking into account the fact that if you're trans, a WOC, disabled, or basically anything but a slim, blonde-haired, blue-eyed, white woman with DD's, you aren't likely to be able to get in with either a strip club or an agency in any case.

Because of those and other barriers, a lot of folks who previously were able to work from home to vet and attract clients have been forced to turn to street work, which is far more risky in terms of being assaulted or arrested. It's no coincidence that there has been an uptick in violence against sex workers immediately after websites like Craigslist therapeutic and Backpage were taken down. Predators are aware that sex workers have had tools they've used to stay safe removed and are afraid to go to the police. None of this is keeping people engaged in this work any safer.

Some people think all that is a good thing, and assume that removing ways for sex workers to work safely means that they will instead get "traditional" work. If you've been paying your bills this way, you have no paper trail you can put on resume. As creative as resume-building workshops can be in helping to list soft skills to cover up for gaps in experience, there aren't a lot of career advisors out there that can help someone make this kind of background look like they've been working for Avon.

Keep in mind as well that so many folks are just living paycheque to paycheque. When your main or only source of income is suddenly gone overnight, you don't have time to wait the several weeks or months of job hunting, plus the three weeks to a month before you get your first pay cheque. You need to make rent and get food today. When your safe avenues of making that happen are removed, often you're forced to make unsafe decisions in order to make ends meet.

And going back to the fact that it is more difficult for many folks to find stable, and fair-paying employment, there are few "legitimate jobs" that will offer the same schedule flexibility, income potential, and accessibility. Trans women, for example, have far higher unemployment rates and face more employment discrimination than the general population. For many folks, sex work has been their way to be financially independent and in control of their work.

Now, you may read all of that and think, "I still think sex work is bad." Well, good for you. Don't do it, then. But know that if you're supporting legislation that criminalizes sex work and sex acts between consenting adults, you are actively hurting people and that makes you a piece of shit. <3 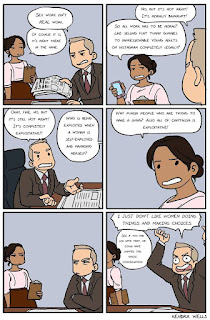 FOSTA-SESTA is now law—where does that leave the Internet?

‘This Bill Is Killing Us’: 9 Sex Workers On Their Lives In The Wake Of FOSTA

How Congress' attempt to rescue sex workers threatens their safety instead

How SESTA/FOSTA Is Going To Affect Us All