September 15, 2012
It may have seemed a bit anti-climactic for me to have been posting a half-dozen times leading up to and during the 3 Day Novel Contest, and then radio silence, aside from an article I wrote on the Monday about "What can I do, right now today, to help stop sexual violence".

Truth is, I didn't finish. Well, I mean, I finished that blog post that provided a lot of resources and practical and tangible things people can do to help reduce sexual violence in their communities that didn't rely on victim-blaming and falling back on old, tired tropes that don't work. So, you know, I did stuff, just not what I'd hoped and intended to accomplish. 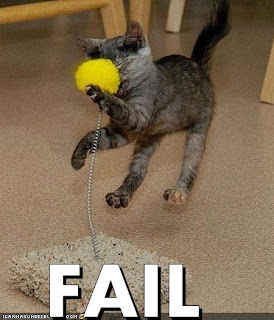 And I'm cool with it. I failed and survived. No t-shirt for this failure, just some insight in what I need to do or not do next year.

So what happened? What got in the way?

It didn't start out terribly well. On Friday night just before 11pm, as I was counting down the minutes until midnight when the contest officially started, the cat I was kitty-sitting for a friend decided to play Superman off our 8th-floor balcony. He wasn't harmed, but that scared the ever-loving shit out of me, caused me to hop in the bottle early to calm my nerves, and I was in bed before midnight.

The Saturday went ok, but my progress wasn't stellar. Partly because of the shock of the night before, and partly because I knew I couldn't drink too much or stay up too late that night since I had to be up before 6am and walk to work by 7am on Sunday morning. So I went to bed early, with a decent head-start, and got to work on time on Sunday. I completed the scheduled project at work, was home for a couple hours and was able to do a bit more writing before heading back to work for 3pm.

This is where things went downhill again. I was supposed to be at work for an hour. I was there for 8. This wasn't a matter of me not planning my time well - it was an issue of me having to stay on site with another technician for 8 hours while they fixed something that our company doesn't fix in-house.

So, I got home after 11pm, happy I would be getting paid lots of overtime, but pissed that my second day was a complete bust.

My partner had come home early, too. She got in on Sunday night around 8pm, so she was able to come to work to keep me company and then give me a ride home.

And then she arranged for us to have brunch with friends at 10:30am. And then she invited them to stay over for a BBQ in the afternoon.

I wrote a blog post and threw in the towel.

So, next year I'll be leaving town and staying in a cottage with a friend who also writes and wants to take on the contest, with her partner there to take mine out fishing allllll day and keep her away from the cottage and out of my hair.

The thing is, I'm ok with what happened this year. It was annoying and aggravating that I didn't finish what I had set out to do, but one thing I've learned is that it's ok to fail. This isn't a new lesson, by any means. I've taken this lesson to heart for a good number of years, now, to the point I'm a pro at the fail-and-recover.

Because it's ok to put myself out there, even publicly, take a chance and fall flat on my face. I fail at things all the time. And I usually get much better at them as a result.

Take my cooking, for example. The FABulous kitchen may still be dead and buried despite my intentions to resurrect it, but I have been cooking like a boss. We've been having friends over for BBQs at least once a week, at which time I've taken the opportunity to make all sorts of different veggie concoctions and combinations wrapped in foil, in casserole dishes, in pan, and right on the grill. I just don't have photographic evidence to show for it. Or for the stuff I've burned-to-death or that tasted like ass and caused me to order pizza. I mean, that doesn't happen terribly often any more because I've made enough bad food to know generally what's gonna work together. But it still happens

Long story short, with taking chances on success I take on chances of failure. And I'm not ashamed of it or feel like I need to apologize for it. My energy is better spent moving past it and finding lolcats to highlight the hilarity and absurdity of my lost weekend of suck.