June 04, 2012
SlutWalk Toronto 2012 went down on Friday, May 25th with a good turnout, fair weather, and great spirit. And now, of course, there are more articles coming out that decide to completely miss the point and to do so by abusing an oft-misused literary device: the analogy.

Remember in the 90's when everyone was irked with Alanis Morrisette for ironically writing a song called "Ironic" which misused the term "irony"?

Irony: ur doing it rong. Ironically. Or then you're doing it right? I think the universe just collapsed in on itself.


﻿Now, on to some of the "new" criticisms (by new I mean an article published recently, the argument itself has been unsuccessfully rehashed more times than I can count). According to Mike Strobel, "...my advice to travellers on Manitoulin is not to dress like a deer, despite your perfect right to do so." Go ahead and wade through if you haven't heard the "but the officer was just trying to be helpful, you ignorant harpies"-argument a million times. At least this article is brief.
Another author has already responded quite eloquently to the above article, but I'd like to address more fully the problems with this, and many other analogies that get tossed around when criticizing the SlutWalk movement.

First, let's please take a moment to look at the dictionary definition of what an analogy is (supposed) to be:

Bad analogy: If you dress like a deer on Manitoulin island, you're liable to get shot. Therefore, dress "safely".
Why it's a bad analogy: So many things wrong with this analogy that it makes my head hurt. Firstly, it buys into the Dave Chappelle-esque "whore's uniform" trope that there is a specific outfit that marks one as a sex worker and therefore invites all manner of abuse. In regards to that point, long story short, sex workers don't deserve to be victims of sexual violence. Full-stop.
Also, in this analogy, the hunter is going out with the intention to shoot and kill a deer. The analogue would be a rapist who goes out with the intention to rape someone. You don't have to look "like a deer", you just have to have the misfortunte of being in the viscinity of the intended rapist. If someone goes out with the intention of raping someone, then more than likely they will succeed in their mission. Not because of clothing of their victim, but because the rapist made the decision and made the conditions happen for them to be able to attack and assault someone. And if they "accidentally" rape a virgin, or a mother, or someone with greater social value than a sex worker? Sex workers don't deserve to be targets of sexual violence any more than anyone else, so there is no win either way, unless the rapist is stopped, caught, arrested, or our justice system and culture are changed to make rapists less likely to attempt and get away with sexual assault.

Bad analogy: If you walk around in a poor neighbourhood waving money, you're liable to get mugged. Therefore, dress more conservatively so you don't get raped.
Why it's a bad analogy: Firstly, articles of clothing have not been shown to increase the chance of one being a victim of sexual violence. If there were an article of clothing that did prevent rape, I'd be spending my time encouraging people to wear it. I'd buy stock, I'd buy in bulk, I'd give this magical item of clothing away on the streetcorners. Secondly, as a woman who is largely femme and passes as a woman, I don't have to do naked cartwheels for people to know I have a vagina. There's no amount of more or less vagina that I have that is more likely to attract a rapist. Rapists don't see someone in tight clothing and suddenly think, "My golly. That person is in possession of a vagina! I was going to go golfing or to see a movie, but now I've decided I'm going to sexually assault them instead." Heck, rape doesn't just happen vaginally, so even the absense of a vagina doesn't protect me if someone wants to victimize me.
A partial side-note to this analogy is that it also draws largely on the trope of rapists only hanging in alleys or "bad" neighbourhoods or someplace dimly lit, with fog machines and scary theme music. This is not how the majority of rapes happen. Most rapes occur in the victim's home by someone they know. That, imo, is much scarier than the alley trope. I can generally avoid alleys (unless access to my apartment or place of employment goes through an alley, or if I find myself homeless and seek refuge in an alley, or any of a million other reasons why alleys exist and people go through them), but avoiding home is a whole 'nother kettle of fish.

Bad analogy: You wouldn't wave a piece of raw meat in front of a lion, so don't flaunt your body in front of men if you don't want to get raped.
Why it's a bad analogy: I've talked about this before, so I'll be brief: this analogy tends to paint women as victims and men as aggressors, and does so in the most insulting way to men. According to people who trot out this tired trope, men are slavering, mindless beasts who can be prompted to attack at the slightest provocation because they just can't help themselves. This is ludicrously insulting to the vast majority of men who are not rapists, and ignores the fact that rapists are very much in control of themselves and that the act of rape is purposeful act of violence.

Bad analogy: When you put your goods on display like that, of course people are going to want to sample the merchandize. Dress demurely and you won't be assaulted.
Why it's a bad analogy: My breasts aren't "goods". My ass and legs aren't "goods". They're not something that can be bought and sold piecemeal, separate from my identity, from my person, from my good and bad deeds as a human being. We all come together, lest something dramatic and tragic happens to separate me from my body parts. Furthermore, people of all gender expressions and sexual identities are sexually harassed and assaulted in all manner of clothing, at all ages, regardless of whether they are perceived as traditionally "attractive". Sexual harassment and assault doesn't stop just because someone decided to wear a turtleneck on a particular day. If it did, I'd be investing in stock.

So, when someone tries to explain to the "poor, silly, misguided, estrogen-addled wimmins" why they're wrong when they protest against rape myths like adhering to a particular dress code, with these woefully misguided and erroneous "analogies", either point them to this blog or start singing some Alanis Morrissette really loudly until they get uncomfortable and leave. Your mileage may vary. 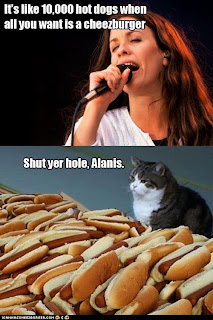